What to expect from your piano tuner:
“You can expect a friendly and professional service. I will always take care of removable case parts, such as your fall, top door and bottom door. I will respect your home and possessions in it. I will take care of your floors and carpets by wearing protective shoe covers over my own shoes. I will wear an apron so that your none removable case parts and other piano parts don’t suffer scratches and damage from my own clothing. I will use your personal data only to contact you. I will not share with 3rd party companies. I will ask your permission to keep your details in a protected and secure database and remove or make them available to you if you ask for this. I will charge fair prices and always supply you with a receipt upon payment for your records. If there is a job I feel is above my capabilities I will find another technician who is able to do so, in order to take better care your instrument”.

Rachael has been vetted by the Disclosure and Barring Service (DBS) and therefore approved to work in situations with vulnerable adults and children. (Previously known as CRB checks). 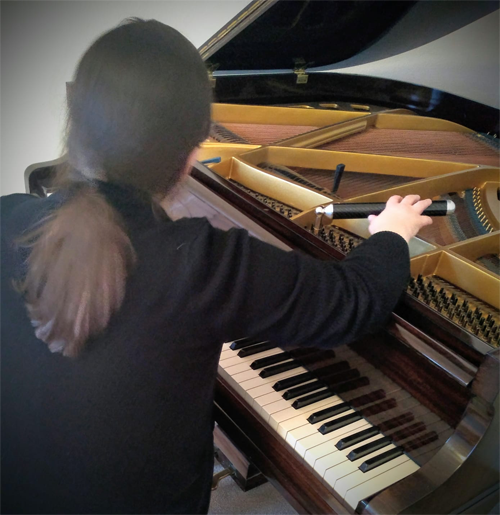 Areas I operate in:

I am willing to travel further for special events and concerts. I am able to easily travel throughout all areas between the above mentioned.

What I ask of my customers:

“If you have an appointment with me, I will phone the day before, to remind you of the appointment. If you need to change the appointment, please phone me to arrange another date/time. If you keep ornaments on top of your piano, I would ask you to remove these before my visit in preparation of any servicing - I will need to take off the outer case parts to access the action and tuning pins. You are not required to remove these parts, it is included in the service. During a tuning, I will require the environment to be as quiet as possible - please try to avoid using your vacuum cleaner for example. Please do follow the advice given regarding your instrument as this will help to maintain the good standard of it and reduce the number of services and damage that could occur”.


I am prepared to travel to other areas but this usually means a small surcharge to cover the transport costs. If you live in a remote area but have friends who also have pianos near to you, I can give a discount. Please contact me for more details.

Does your piano need repairs, voicing or regulating? During my visit, if I find that your piano needs any of these I can arrange this work to be carried out for you.

How often should I have my piano tuned?

If you play the piano frequently, for example, 3 to 4 hours a day, and work to a performance standard, it is likely you may need to have your instrument tuned more regularly. This could be as often as once a week. If you have a child in school who is learning to play the piano, routine maintenance is important; a student may feel off-put if clashing notes or poorly functioning and badly regulated action parts inhibits his or her attempts to learn and play. It is recommended for a family with a piano in general use that a visit no less than every 6 months is made. It is not out of the norm that more frequent visits may be necessary on some pianos.

The piano is a highly developed and complicated piece of equipment. It contains approximately 240 different lengths of highly tensioned wire, with approximately 160 lbs. of pressure per string and a 15% increase in the bass. This produces an overall strain on the frame of about 21 tons. These lengths of wire make up the 85 to 88 notes that spread across the musical range. Each note has its own individual mechanism, the combined total of which, in the case of an upright piano, adds up to 14,000 moving parts. In the case of a grand, the total reaches as high as 22,000 parts. the piano must be maintained at a specific tension to achieve a good musical sound, therefore, the matter of maintenance is an on-going process. A piano consists mainly of wood and iron, and both materials are subject to movement. The movement of the wooden soundboard and the frame causes the wires to change tension without prompting by the user. Thus, it is important to set up regular appointments for the tuning of the instrument to ensure satisfactory results. This schedule isn't a hard and fast one, but I can make recommendations and set out guidelines. Once a year is a minimum for most pianos. Most piano manufacturers recommend twice a year and some three times a year.

Humidity and Temperature have a big effect on pianos staying in tune more so than playing. Quite a lot of homes in the months of November to April tend to have a humidity range from 38% 40% and from April to November 40% to 65% and some as low as 20%. This dramatic change makes the soundboard swell and shrink this up and down movement pull and loosens the piano strings putting the piano out of tune. Pianos that are in rooms with the humidity below 38% for several months are causing the piano long-term damage.

Why maintain a piano?

The piano is a highly developed, complicated piece of equipment. It contains about 240 different lengths of highly tensioned wire. (Approx. 160lbs per note and a 15% increase in the bass giving you an overall strain on the frame of 21 tons approx.) These lengths of wire to make up the 85 to 88 notes spread across the musical range. Plus, for each note, there exists a mechanism, which in the case of an upright piano contains up to 14 different moving parts. In the case of a grand up to 22 per note. 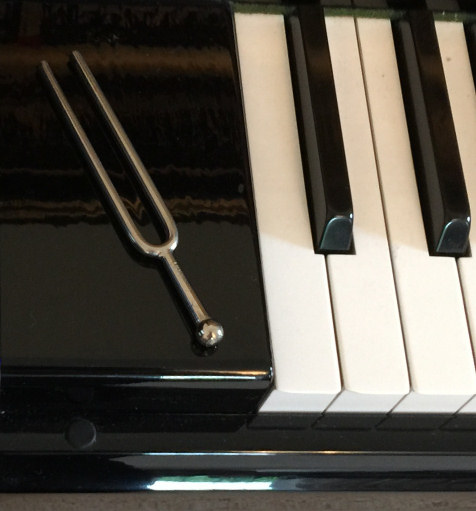